With such a large flock there was always one task or the other to be done and I gave him a hand to see things were well. For early Spring or really late Winter would soon be upon us and with it the busiest time of lambing. Then with Tommy in the beginning, and until he was satisfied I knew what I was doing, I went around the flocks checking on ewes that were having difficulty lambing. Sometimes the lamb was the wrong way around and needed turning. I assisted in the birth if needed, ensuring the newly born lamb was breathing and then putting it to suckle. Other sheep bore twins or triplets. Some were reluctant mothers, and some we brought into the barns to lamb. It was a time consuming task that had to be done at all hours, often far away up on the fells no matter what kind of weather.

Lambs are delightfully playful little creatures. However, a few were not at all well when first born, and in the cold we took weak ones back and put them in the kitchen’s slow oven to warm through. Then out to a barn where we bottle fed them. Some died at birth, if so we would skin it and put the skin on a lamb rejected by its mother, and give it to the original mother. After warily sniffing it they usually adopted it as their own.

Tommy had his own dogs, and as I became more competent he entrusted me with two of my own. You cannot work sheep without them and every time I went up on the fells they came with me. One was called “Meg” a border collie and once I had learned the art they would go off on my commands with a whistle, to fetch and drive well often out of sight on the far side of a fell. It took some time to get it all right but Tommy, and the dogs, was patient with me and I much admired his skills;he was also fun to be with. When not working, the dogs like those at Greenbank Farm had in the yard their own barrels, plates and were fed porridge. 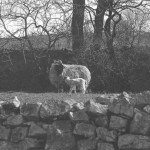 A sheep with a lamb. Notice too the dry stone wall in the foreground 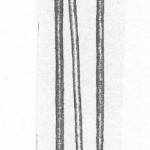 To handle the sheep I had my own shepherd’s crook, a long stick with a carefully crafted crooked end made from horn. Walking the fell, I used it to steady myself over the rough ground, and then I reversed it to catch a sheep with the crook around its neck or leg. It is an indispensable shepherd’s tool.