As I had heard from Mr Kidd and others, Mr John proved to be an able hill sheep farmer and an expert on sheep. With this knowledge and abilities he was a respected member of Lancashire’s agricultural community, and much sought after to serve on various established and special wartime committees set up to get the most out of the land. 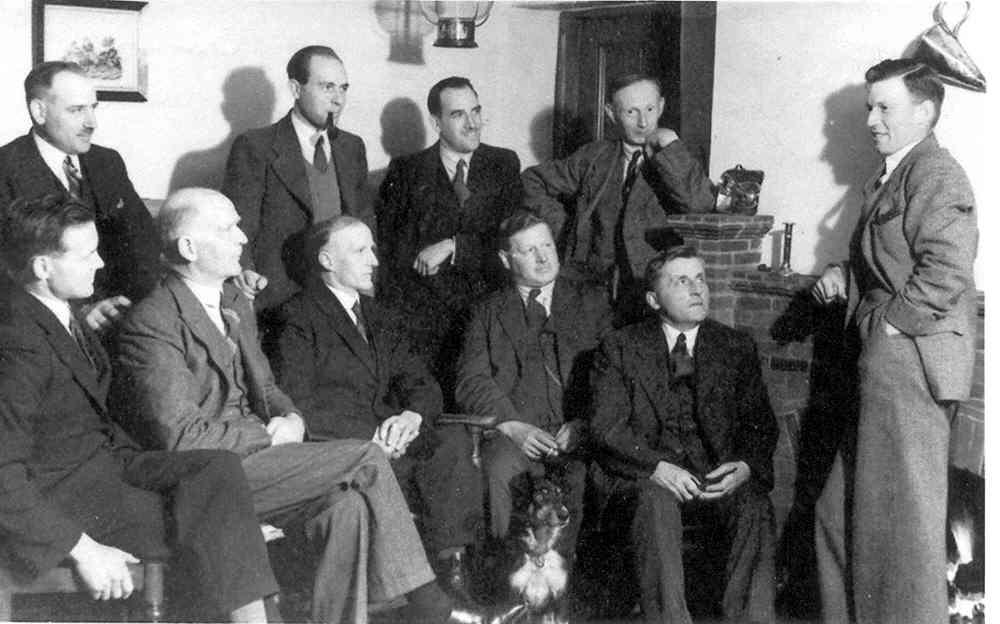 The Inglenook. Marshaw 1944
Mr John Drinkall standing at the fireplace, and Mr Tom Drinkall (his father, at second left) with neighbouring farmers. What the occasion was I do not know, but maybe it was a committee meeting.
See the oil lamps, we had no electricity at Marshaw then, and the sheep dog at his master’s feet, normally dogs were not allowed in the house and certainly not in this room.
These men were typical hill sheep farmers of the kind I had to satisfy, a tough bunch.

This service work meant Mr. John spent much time away from the farm and little time actually working it. He was however very much in charge of its direction. His younger brother Edward, whom I had met when at Greenbank Farm was in charge of the day to day work and management. His father “Tom” who although old was still very fit, two brothers Tom and John Atkinson and the shepherd Tommy Leedham filled out the workforce, all of whom I had met already. Casual workers helped out from time to time, sometime Irishmen and others who were ”on the road”. Edward lived in one of the adjoining cottages and was to marry Dulcie, from Liverpool and who lived in Greenbank Road. She was with Veronica and I at Hutton, and had come earlier to the Trough of Bowland, but worked on another farm some distance away.

As time went by I got to know Mrs Drinkall very well through helping her with the housework – although these were not part of our duties, and with all the other things a farmers wife does. I learned a lot from her about cooking, which I enjoyed, and also about the efficient running of a household. All this was an eye opener to me. I never developed such a relationship with the other farmer’s wives that I had stayed with, they were, of course, much older women and not so well educated. Nor did any of them take a close interest in me.