Working with Horses and Crops

I was soon told to plough one of our few arable fields. It is a skilled task and hard physical work. I also wanted to make a good job of it. The essence of ploughing is getting your first furrows in straight. Then to follow that line, turning at the headlands either end of the field and working systematically across it. I knew every person on the farm, and our neighbors would see it and comment. My horse knew what was required and pulled steadily, I had then to manage the reins and the plough. The uneven ground that I had to walk on, the turned furrows themselves, made it very hard physical work. I tried hard and succeeded, and was able to look back on that field with great satisfaction. As I didn’t get criticized, I assumed I met Mr John’s, Edwards and the other men’s high standards. I was beginning to show my mettle.

With other ploughed fields, it was soon sown with turnips that we grew for feed. When they came up later I grubbed them up, cut off the leaves and threw them in a cart. This I always seem to have to do when it was cold, raining and in a strong wind. Even wearing oilskins and a sou’wester, the rain inevitably found its way down my neck and my hands got blue with cold. It was a miserable task. After harvesting, I chopped them up for the feed itself.

But I left all this type of work behind me when I went with Tommy Leedham, the shepherd and his dogs, to attend the sheep. And we had a lot of them. They were of the breed known as Lonk, a name derived from the Lancashire word “lanky” meaning long and thin. 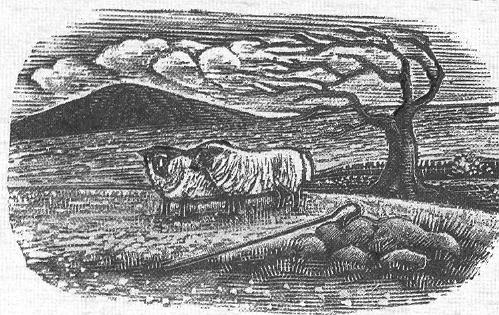 A picture of sheep on the fell, a shepherd’s crook in the foreground.

A mountain breed, the Lonks were found only in the hills of the central and south Pennines, specifically Lancashire and Derbyshire. The sheep are of the Blackfaced Mountain type and characteristically have black and white faces with long legs suiting them to the rough fells, peat bogs and rocky hills. Their wool was used for carpets and similar wartime fibre needs, and for meat. They were tough and hardy.