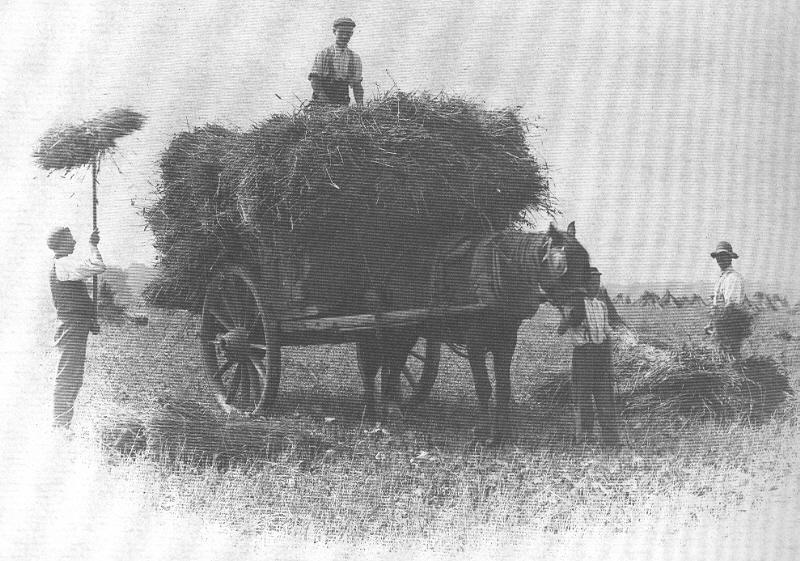 Haymaking. As discussed in the chapter, loading this cart so that you did not lose all the hay once it moved was a real art.

Hay time in August, was another busy time and we always seemed to be working to get it in before it rained. When to start this task was a crucial one, and that was left to Mr John, for a prolonged spell of dry weather was required, something we rarely got. So when started we had to get at it. First the grass had to be mown, left to dry, turned and then brought in. Loading it required skill because if it not packed carefully so as to get it to hold firm it would just slide off. Unloading in the barn was slightly easier, but it was still hard work and I perspired freely, caught many seeds with my hair, and received many midge bites. I was well ready for a bath by the time we finished. When we worked late on such occasions as this Mrs Drinkall would always leave a good supper for us that we were more than ready for, and often chided Mr John that he was working Veronica and me too hard. It did get a bit too much at times and on one occasion I became totally exhausted.

Of the other particular tasks that I recall, one was muck spreading of which I already had plenty of experience. Of course this task was manual, that meant filling a cart from the midden using a pitch fork to loosen and lift the matted and well matured material and taking it to the fields, dumping the load in heaps and going back to spread them. Another was ditching, and that meant getting down into the ditch, usually in the cold of winter it seemed, and where the sides had fallen in and digging the ditch out to its original bottom. Hedging was slightly easier work, but hawthorns have sharp thorns, here I cut and layered the old to form a stock proof hedge. The cut pieces I piled in heaps and burnt. Fire appears a living thing and it was company, but while the smell of the wood smoke was pleasant too, it got into my clothes and hair and stayed with me for days.