In April 1944 I was awarded a Women’s Land Army Proficiency Certificate, and Proficiency Badge that was I think presented to me at a ceremony in Lancaster. I felt in receiving this that my competence had been noted and appreciated. It also made me think I was valued and I had not been found wanting. While very hard physical work, I had enjoyed the challenge of learning the job, and doing it well. 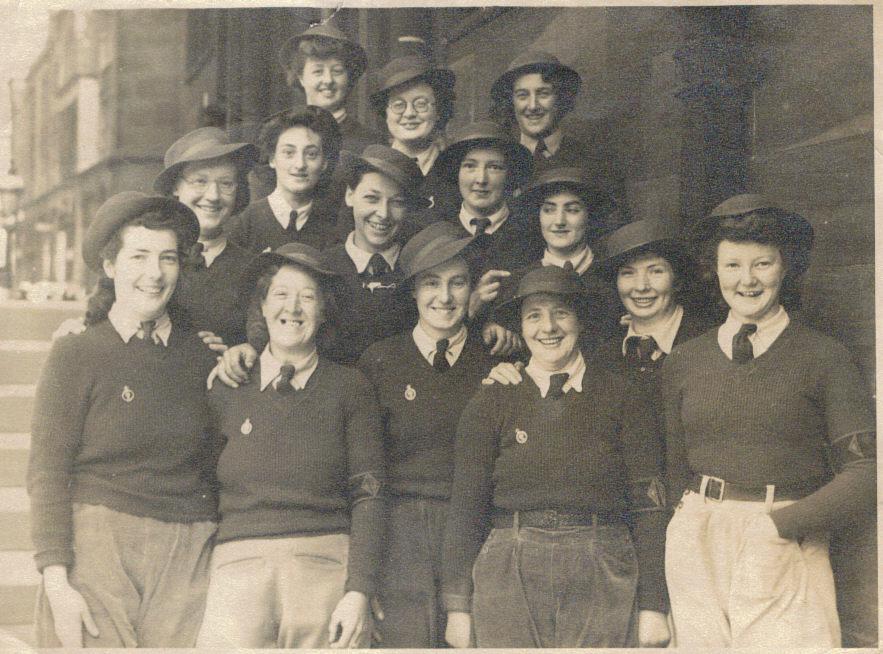 Mansion House London 1944.
I am front right, and Veronica is top left. Who the other girls are I do not know for we only met on this one occasion. (You can see how much better my tailored breeches were than the regulation issue ones, I felt very smart in them!)

Then came a greater token of appreciation. In recognition of the work the WLA was performing for the war effort Veronica and I were selected as part of a contingent from Lancashire – perhaps due to Mr John’s influence – to go to London and be presented to Her Majesty Queen Elizabeth. I was very proud of this honour and in my best uniform marched, with other girls from all over the country with a military band through the bomb damaged and battered streets to the Mansion House in the City of London. There we were presented and took tea in the presence of the Queen. It was all so very thrilling and she was very gracious toward us. It was as can be imagined a big occasion in my service. How I got there and where I stayed I can’t remember. It was the first occasion that I visited London. Unfortunately too I do not recall much else of this event as it was so exciting, beyond memories of the splendor of the occasion and actually meeting Queen Elizabeth.