But back to my farming, and one matter not so far mentioned was Mr John’s pedigree herd of Friesian cows, which are white with black markings. It is from these we got our milk, but also Mr John bred from them and each calf had its pedigree, this entailed beforehand keeping a note of both cow and bull, and on birth noting the calf’s characteristic markings in a special book. The bull was our own and he was a treasured and pampered animal requiring special care and attention. He also needed very careful handling and this I was very wary about. But I got to know him and he consented to my leading him by a short pole and the ring in his nose. Most of the time he spent in his own stall, but he did go out for stud purposes and on those occasions Mr John generally took him. Not that I particularly wanted to attend, but working on a farm with animals one soon becomes aware of the basic “facts of life.”

Our predictable cycle of farm work would occasionally be interrupted at Marshaw. Being part of the Earl of Sefton’s estate, he used to come with shooting parties for the game, pheasants and grouse. On these occasions the Hall was opened up and before one visit I can recall going to have a look. It was a grand house but very bare and only used at these times. The Earl invited many to these shoots, including the Duke of Gloucester. After one shoot when they were at the Gamekeepers Cottage, I took my autograph album and asked a footman if I could have the Duke’s. He took my book and eventually returned it with a page signed “Henry”. I then filled in the details and the date, 12th July 1944. I must admit to a little disappointment, I thought he might have signed it “His Royal Highness, The Duke of Gloucester”!

In this album also were more mementos of the WLA, with some from the girls at Hutton and some of Marshaw. One entry by Mary Parkinson of Root Farm was the Lord’s Prayer written minutely within a very small circle. Others included one by Mr Timbrell the headmaster of Abbeystead School, one by Ally Mc Kutcheon, and one by Edward Drinkall, Mr John’s brother[1. I am grateful to Veronica for these memories as my book went missing a long time ago.]. 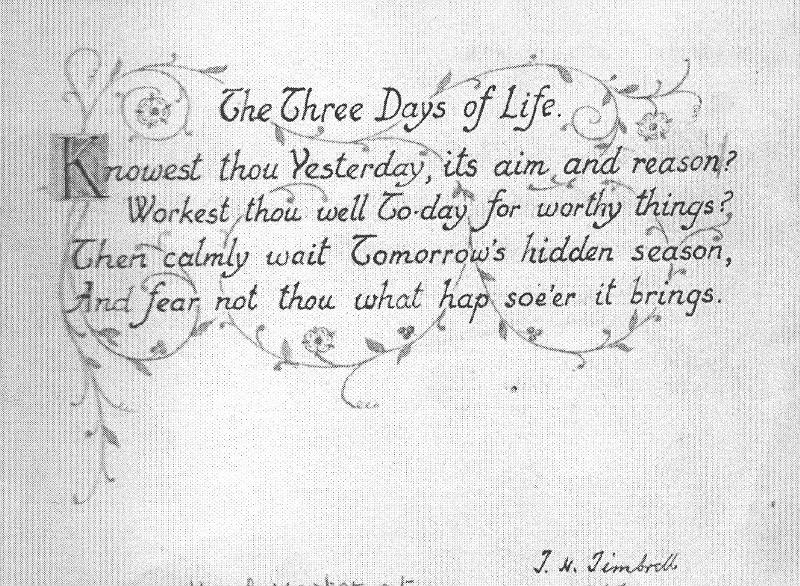 An entry in my book by Mr. Timbrell, the headmaster of Abbeystead School