Once the training was complete, I returned home and hated it more than ever. For I had tasted the delights of independence, lived in surroundings I felt at home in, spent time with a bunch of lively girls from many different walks of life, learned a great deal about a subject I had known nothing about before, worked hard physically, and after all the years of my childhood when I seemed to be ill a lot of the time was very fit. Doctor Smillie was right; for as he foresaw the WLA would be the making of me. I am as grateful to him as I was to uncle John for ensuring I had this opportunity.

I could not wait for my posting to a working farm well away from the miseries of home in a grimy Liverpool street. It soon came and with Veronica, we were to work for a Mr Kidd on Lower Greenbank Farm near Dolphinholme in Over Wyresdale, south of Lancaster. However Veronica’s father would not let her take this assignment, because he would not allow her to live and work away from home. What his reason was I do not know, but presumably he thought her too young and wanted to keep an eye on her. My parents said nothing. 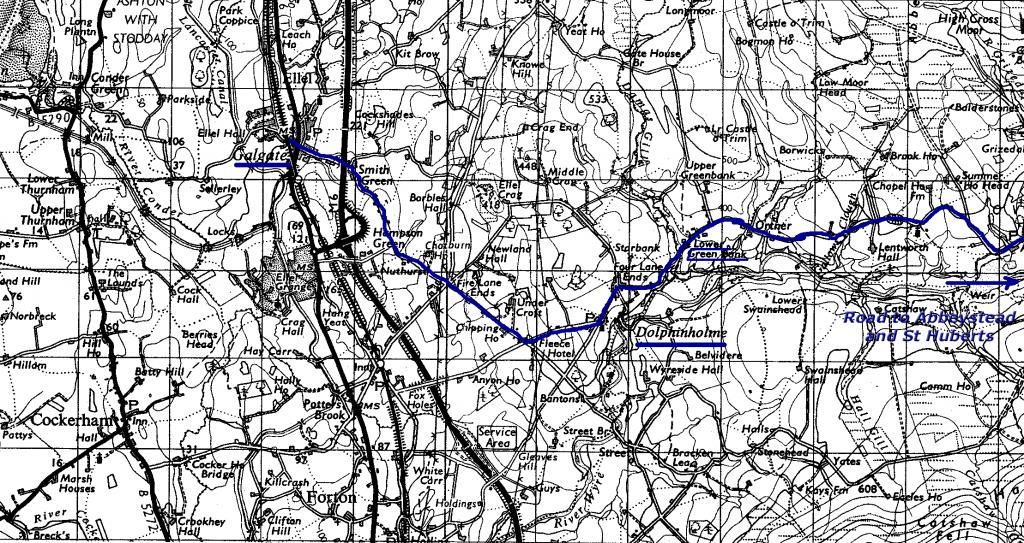 Galgate, with Lancaster (further north) is to the upper left, Lower Greenbank Farm is middle right (east), below (south) is Dolphinholme.
The M6 running alongside the railway to Scotland was not there in my day and the old A6 that was, is to the west of it.

In early 1940 the time arrived to start, and I caught a train from Liverpool Exchange to Galgate. While journeying, and not yet 16, I spent the time wondering what was in store for me. There to meet me in the station yard was the local WLA supervisor in a small car. I can recall to this day sitting in it as we traveled the four miles to Lower Greenbank, journeying along narrow country roads looking at the hedgerows, the fields and beyond the fells rising to their tops. I had seen nothing like this previously. And, in this scene I was to commence work in earnest.