This episode I recall with little pleasure.

Having sorted out things at home, and as matters got no better in future years in dealing with them I always thought of myself as the juggler spinning plates, I went off to Holt Hall Farm. It was on the easterly outskirts of Liverpool at Gateacre, and for its day quite large, carrying a dairy herd of over 50 milking cows supplying milk locally. Holt Farm also had  pasture  and arable land of a considerable acreage. There were  no dogs,  sheep, pigs or hens. 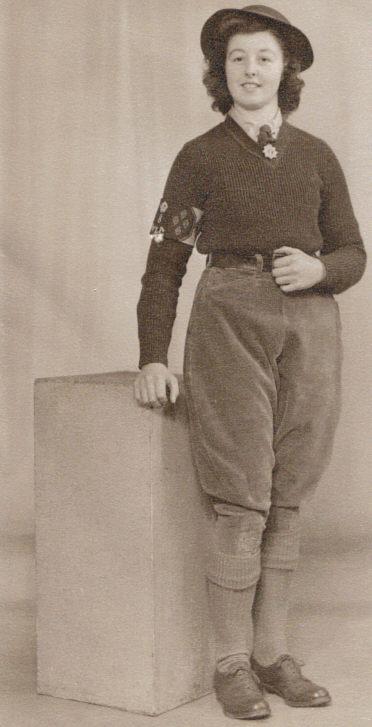 Veronica at Holt Hall Farm in 1941. She is in her best uniform and the badges on her right arm indicate she had served for two years.

Veronica was well settled in and liked the dairy work, going out on her milk round, and didn’t mind the work with the crops in the fields. The farmer was a Mr Jackson and Veronica had worked there as long as I was at Lower Greenbank Farm. She had lived at home cycling to and fro in the blackout while air raids were taking place, and there when German bombs landed and set fire to the barns.