On other occasions and much fun were the invitations to visit nearby farms for a meal and social gathering. During my stay at Marshaw, I also joined the Women’s Institute, which I continued with until 1990 when I retired to the USA. We also skated in winter with the local children on the reservoir at Abbeystead, and we went to dances. These were sometimes in the hall at Abbeystead or we would get on our bicycles and ride through the night to Dunsop Bridge.

Dances at Root Farm were always most enjoyable and were held in their wool loft. Often when we went to these Tommy Needham, our shepherd who lived at Dunsop Bridge. He would pick us up half way in his little car, we would then dump our bikes in the heather and go on to the dance. We felt an air of expectation about these beforehand, for as we approached the barn you could hear the band playing. Far from professional, the band consisting most times of an upright piano, a set of drums and a double bass, kept up a good beat. The dances were mixed, the standard waltzes and quicksteps to tunes of the day, old fashioned waltzes and Valettas, Paul Jones with a regular change of partners, energetic Scottish and country dances. With refreshments and conversation a good time was had by all.

Mrs Mary Parkinson, the farmer’s wife at Root Farm let us stay overnight and then early the next morning Tommy would take us back to our bikes and we would cycle back in time for milking and after that breakfast. Cycling was our only means of getting about and returning through early morning and before break of dawn we often sang a popular song of the time -“Oh, give me land, lots of land under starry skies above. Don’t fence me in. Let me ride through the wide open country that I love. Don’t fence me in”, and that seemed most appropriate in the circumstances. 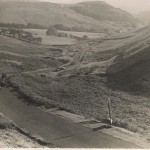 The road east through the Trough to Dunsop Bridge. It was this road that we rode on our bicycles to and from dances and church. 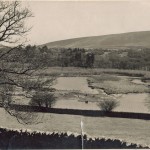 Abbeystead Reservoir where I used to skate in winter moonlight with the local children. 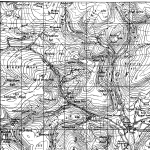 The road through the wild terrain of the Trough of Bowland, Marshaw is to the upper middle left (west), Dunsop Bridge is to the lower right (south east) and Root Farm is below it at “Root”.