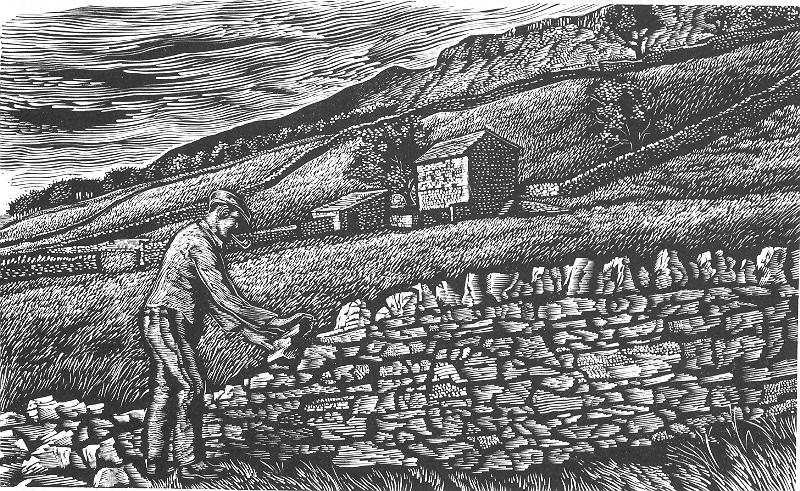 Up on the fell, repairing a dry stone wall and with an out barn beyond.

Another task and one I got great satisfaction from was repairing damaged, dry stone walls built generations ago using fallen stones or new. As the farm had miles of these wall, I had plenty of opportunity to master this task, and a special skill was needed that I was taught by an experienced old man. It is a rewarding job and rather like a jigsaw to find the stones that would suit, the biggest and best outside, the middle filled with the smaller and broken pieces.

Sometimes there was a touch of adventure in these jobs often miles away from the farm. Occasionally when in the out barns upon the fells where I had gone to put fresh cut bracken for bedding, I would find a tramp who had made himself comfortable. I never had any trouble with these gentlemen, and they often were, but it was rather disconcerting.

In these distant jobs there was a degree of hazard from the weather and on which I always kept an eye. For often on the tops of the fells cloud would suddenly appear, it would start raining and the visibility be reduced, for one was immersed in the cold and damp of a cloud. It was very easy then to lose one’s bearings for there were few landmarks. So what I used to do was walk, avoiding the treacherous bogs, until I found a descending clough1 and follow it down until out of the mist, and then I could work out where I was. Alternatively, if we were done for the day, I followed the dogs who always knew their way home.

Working far away on these jobs from the farmhouse, Mrs Drinkall gave me “baggin”- a bite to eat and a drink. I ate mine in the lee of a wall with the dog laid out at my feet. These were enjoyable breaks were I had a little time for myself, and the opportunity to enjoy all the solitude and beauty around me. For most of the time I was much too busy and with my head down working. On occasions like this I had the time to see how wonderful it was that I was in the WLA and at Marshaw. Liverpool was a whole world away. Even so reminders of the war were present, for up on the fell tops during the day smoke from burning and blitzed Liverpool could be seen on the horizon, and at night the sky was lit with the glare of fires. I was sorry for those suffering through it.