Here I learned that what I had been taught at Hutton was far from the realities of a working farm in 1940 Lancashire. We had been taught all the modern techniques with latest machinery. Here things were done as they had been done for centuries, and the machinery was old and decrepit. So I had some adjustment to make. I like to think I am adaptable, and adapt I did. Mr Kidd on his part was very patient and in a kind and understanding manner showed me how things were really done. I learnt fast and soon was handy at most things.

The principal income of the farm came from the small dairy herd of about thirteen milking cows, and as I was familiar with dairy work I soon settled into the routine of twice daily milking and all that it entailed. A strict deadline drove all our work, the lorry picking them up to take to the dairy would not wait. We had to put the churns at the roadside, and I soon learnt the knack of rolling full churns on their rims, and gained the muscles to lift them up onto the loading platform. If we missed it the milk was unable to be sold, and had to be poured way with Mr Kidd losing money. 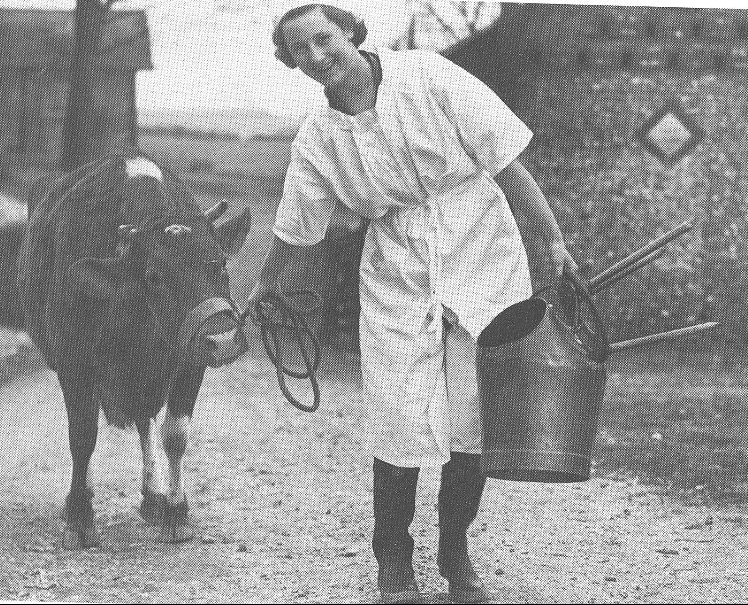 A reluctant cow being taken to the milking parlor, the girl complete with milking bucket and stool and wearing her overall, hat and wellington boots. This is similar to my experience.

All the cows in the beginning had to be hand milked, each had a name and each was different. Some gave easily; others had to be coaxed and some were just bad tempered, that moved, kicked and did their best to upset the milking bucket. I sat on a milking stool and milked into the bucket, and on a cold day it was nice to be next to a contented warm cow. They had their own particular stalls and woe betide the cow who went in another’s. In winter they were kept in the shippon. In better weather the cows were out in the pastures and had to be brought in, and afterward taken back. I settled into this routine readily. The cows knew it already. Toward the end, Mr Kidd was able to enlarge his milking herd and got mechanical milking equipment, which improved and speeded things up, but it meant knowing when one cow was dry and quickly moving to the next, something of a frenzied ballet for often I was left to manage alone.