What I Found at Holt Hall Farm

The farmer, Mr Jackson was of the old school. He lived with his wife and and his son Harry who helped him on the farm along with another lad called Billy, two land girls, Veronica and another whose name I can’t remember. I made the made the third Land Girl. Here the farmhouse was of traditional brick, as were the dairy, milking parlour, shippons, barns and stables, with all the land flat. After being up on the fells, I cannot say I liked that.

Harry drove the tractor, and as before we also had several horses for farm work. So I found most of the work familiar with no great change. However, the farm itself and my experience working there did not compare favorably with that I had happily enjoyed at Lower Greenbank Farm. I just could not put my heart into it. Sad but true.

Us three girls lived in a farm cottage with the girl I can’t remember being given time off to do the housekeeping and cook our meals. However that didn’t work out, for she was slovenly and a poor cook, besides being useless at her job. Eventually she was fired. Veronica and I then went to live in with Mr and Mrs Jackson, and we did better for she was an excellent plain cook, her house was clean and tidy and we were a lot more comfortable.

With all the arable land there was a great deal of work out in those large open and flat fields , hoeing, cutting kale and the like that I found monotonous and dis-spiriting, I could not raise my eyes to the fells for invigoration nor had I the company of the dogs, horses, sheep and lambs, pigs and piglets, hens and chicks. And I no longer had the pleasure of daily attending to their needs.  I realize now that that had a great deal to do with my discontent.  I missed also the new friends and the new life I had made in Over Wyresdale.  And while I did the work with as much enthusiasm as I could muster  there was no joy or satisfaction such as I had had before. I also felt that Veronica having been here longer asserted a degree of superiority that did not sit well with me.

Mr Jackson eventually sensed all this, and I was then given more suitable work: the milk rounds. Even here it was in and around many a suburban street and Liverpool itself, wherein was my mother and father, but a bus ride away. So it will be understood why I do not look back on it with any degree of pleasure. But worse was to come and although painful it did bring eventual release from my servitude.

These rounds I did with a horse drawn milk float. Before however, I could get out on my round I needed milk to deliver. This meant, with help, getting the cows in and the milking itself and afterward leading them back, cleaning out the milking parlour, the bottling, cleaning the dairy and loading the milk. On my return the empty bottles had to be unloaded, washed, sterilized, and stored. Then it was milking time again. With over 50 cows that was a job in itself. 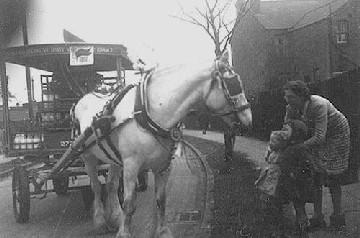 A milk float with the horse having his “treats”.