While public awareness of our role grew and the story of our lack of recognition was known, we did not make any progress until 2007 when Tony Blair announced that the State would recognize the efforts of “Bevin Boys,” conscripts sent to the mines to produce needed coal. Like us Land Girls, the Bevin Boys had not received any recognition after the War ended, and were first recognized 50 years later in a VE day speech given by the Queen.  As the Bevin Boys, like us, were civilian employees no barrier to our recognition now remained. Formal appeals for recognition by the members of parliament of surviving Land Girls followed. In early October 2007, Hilary Benn, Secretary of State of the Department of the Environment, Food and Rural Affairs (Defra) replied to MP Norman Lamb that a badge was being considered. This response was picked up newspapers, including the Daily Telegraph that came to my attention here in the USA. Excited about the possibility of recognition, I wrote to Mr. Benn at the End of October, and received a reply dated December 19th 2007 explaining the process for applying for the badge that was announced by DEFRA on December 6, 2007. Of course, I promptly applied and received by badge pictured below.

I am grateful for the State’s recognition of my service as a Land Girl in the Women’s Land Army from 1939 through 1946. 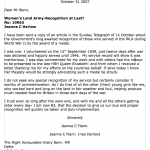 My letter speaks for itself. Given Hilary Benn’s response in Parliament and story in the newspaper, would us Land Girls be getting the recognition that we deserved? 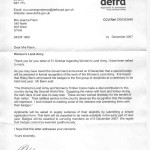 After Defra formally announced that surviving members of the Women’s Land Army would be eligible for a badge recognizing our service, I received this response to my letter.